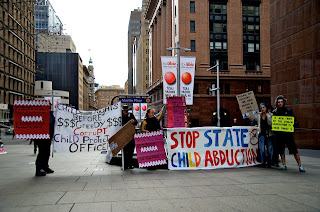 Docsbusters Mondays start early every Monday at the Occupy Sydney Occupation site in Martin Place (corner Elizabeth St)... The Docsbusters Movement is a convergence of Children concerned parents, carers and outraged citizens who have come together to End State Terrorism of our Families, End State Child Abduction and reinstate the family to its rightful role as the principal building block of Australian communities and society.

Below is a proposed platform which will be put to Docsbusters meeting on Monday.


More info at Docsbusters.org
Posted by Occupy Sydney at 00:32 No comments:

In another example of  inherent dishonesty waste and ineffective management by the current Australian Federal Labor Government, a report just tabled slams the ACCC Grocery Choice website on so many issues that one needs reassess the real purpose this site was meant to serve.

The election promise of cheaper groceries remains absolute spin for as long as big business remain free to gouge profits while applying the thumbscrews to suppliers in order to grow profits... more
Posted by Occupy Sydney at 00:25 No comments:

US imposed aux peace in Iraq

While most of the Western media portrayed Saddam Hussein as a tyrannical dictator and there is clear evidence that sectors of the Iraqi community were persecuted , clearly the freedom and peace delivered by the USA and Australia is a very strange beast indeed ... today in Iraq
Posted by Occupy Sydney at 00:00 No comments:

A High Court ruling in Melbourne today confirmed the right of Max Brenner protesters to enter privately controlled public space for the specific purpose of protesting. The case swung on the technicality that there was no evidence that protesters heard directions by police and Centre Managers to leave the premises. .....more
Posted by Occupy Sydney at 23:55 No comments:

Many of us are across the negative nature of creeping duopoly control of our food supply. In inner City Sydney there are just two remaining commercial market garden precincts. This is one of those precincts. The La Perouse Market Gardens are adjacent to a large cemetery which wants to expand. In land critical Sydney there are questions over this land usage when there is a perceived shortage of land for the living. There is also the issue of locality sustainability - the growing of local food. Cities should do all they can to retain raw food production and here is your chance to incentivise Randwick City Council to do so.

Many of us are across the negative nature of creeping duopoly control of our food supply. In inner City Sydney there are just two remaining commercial market garden precincts. This is one of those precincts. The La Perouse Market Gardens are adjacent to a large cemetery which wants to expand. In land critical Sydney there are questions over this land usage when there is a perceived shortage of land for the living. There is also the issue of locality sustainability - the growing of local food. Cities should do all they can to retain raw food production and here is your chance to incentivise Randwick City Council to do so.

Change.org|Online Petition Form
Posted by Occupy Sydney at 12:58 No comments:

Occupy Sydney
SPECIAL FREESCHOOL
Saturday 14 July 1pm
BRING YOUR CAMERA IF YOU HAVE ONE.
HOSTED By Glenn Lockitch
starting at the Martin Place Occupation (cnr Martin Place and Elizabeth St .( About recording protests police & photography techniques )
Join our Occupy Sydney photographers citizen media peepz and those who want to stay in the loop as Glenn takes us through the rich tapestry of strategies and experiences of his broad experience as an Activist photographer (Sea Shepherd, FOE etc)  , photo-journalist (numerous awards citations) , professional photography tutor http://spw.net.au/tutor/glenn-lockitch and involvement with the Australian Media and Arts Alliance to deliver the best advice and solutions available for professional or amateur photographers and citizens who are interested in knowing their rights to record officials (usually police).


Please join the event here to give the conveners a sense of how many people to cater for ( note: non facebook people please consider the privacy implications BEFORE signing up and your possible decision not to will be respected-you will be welcome anyway.)


Light refreshments, nibbles will be served. (Occupy Sydney has a drug and alcohol free event space protocol and we do ask all attendees to respect this.)
Posted by Occupy Sydney at 17:43 No comments:

What Canberra DIDNT DO This Week

Of Course Julia Gillard and unelected Macquarie Bank Foreign Minister Bob Carr gloat about securing the release of the Australian Human Rights lawyer detained by the Libyan puppet government while steadfastly maintaining a Nelsons telescope view of Austin G Mackells continued denial of Freedom to leave by Egypt. And Australia's foreign ministry seem to have become a repeater station for the US on Wikileaks too, parroting the US line that it is not seeking to arrest Julian Assange.

Climate Minister Greg Combet expresses moral outrage about Corporate price gouging -while part of a government and bipartisan political monopoly which have for decades enabled Monopolist behaviour by Telcos Banks retailers and Corporate profiteers. All talk but no action here.

A battling multi generational farming family from out Walgett way at risk of falling victim to slick debt marketing masquerading as financial planning by the National Bank (along with a myriad of similar cases Australia wide) goes completely unaddressed by either government or opposition at State or Federal level as your elected representatives cringe in awe of the power they have vested in economic monoliths. Who do they represent?

Ineffective Federal environmental and heritage protection laws again failed aboriginal people and sentient beings in North West Australia as Courts in Western Australia threw out the latest cases seeking to protect pristine James Price Point (and the Ningaloo Reef ) from the ravages of Shell/Woodside. Not a peep from Canberra here either as once again their laws which articulate protection manifest devastation.

Another day and another expose of The Catholic Church as a den of paedophilia . This all too common occurence on a worldwide scale should be viewed in parallel with government perceptions on organised crime gangs and criminal associations. If Churches are breeding grounds for paedophilia why are these laws not applied to them? Why are they not subject to anti criminal organisation legislation? Who would say that the protection of children is less important than controlling "organised crime?" And if it is the view of governments that an "isolated few" church goers are responsible, isn't it also the case that an "isolated few" bikies are responsible for criminal behaviour within those groups? Canberra certainly must have one rule for gangs another for churches as we dont see any attempts to apply COCA to The Catholic Church. Nor do we see its subsidiaries stripped of their role in fostering and providing care and protection for children.

Fortescue and Rio have both issued statements flagging a fall in their iron ore input prices - Rio guesses 85 dollars a tonne while Forrest is comfortable at 100. What do they really think? And if they said so would it send their share prices into a tailspin? What if China decides to pay $65pt? What does that do to their gearings? How does that impact the property purchases of mining industry workers and what will the flow on effects be? Are Publicly listed companies a protected species in Australia? Are your elected leaders protecting your right to know. Oh, and do they even care that these corporate multinationals are mere conduits through which the value extracted from Australia's natural wealth flows irretrievably offshore??

These are just some of the perceptions and concerns which make this mornings occupiers fail to notice the rain the cold and the general unfavourable weather conditions as we forego comfort for change...
Posted by Occupy Sydney at 09:02 No comments:

Introducing http://docsbusters.org/ We at Occupy Sydney ( http://twitter.com/occupySYDNEY out of Sydney Australia are partnering with existing like groups Anonymous Family, Concerned Citizens, affected Parents and State Child Abductees in #OpDocsBusters / #OpStopDocs - A movement pledged to end the role of State Childrens Services and the surrounding NGO NFP & Court construct .. these State Funded organs are destroying The Family as the basic building block of community and society while seeking to replace family with government / church/ business based control of community and ultimately society. Judged in the same way as parents are it is incomprehensible that any Church or Childrens Services related Care manager would be considered fit to even be near children -far less to provide their moral compass.

The Docsbusters Movement aims to Shut DOCs Down

Docsbusters meet and promote weekly Each Monday (Early until late) at the Occupy Sydney Occupation cnr Martin Place and Elizabeth St SYDNEY - On Twitter Docsbusters are http://twitter.com/DocsBusters & their site is http://docsbusters.org/

1/ We The Docsbusters Movement call for the immediate repeal of the NSW Childrens and Young Persons Care and Protection Act 1998 and all its State and Federal counterparts.  2/ We The Docsbusters Movement call to End New South Wales Department of Community Services reign of Terror. We the Docsbusters Movement call for the immediate closure of All NSW Department of Community Services (or the current evolution of that department) functions, especially (but not limited to) its role in families children and dealing with the elderly. 3/We The Docsbusters Movement call for the immediate termination of all services and functions of DOCs NSW, with an independent transitional body funded to facilitate the repatriation of children and their natural families (where possible practical and desired).This body should NOT include ANY staff or service providers from within the current DOCs system.
4/We call for the immediate dismissal of all DOCs Staff and Contract service providers including staff of those contractors : a public inquiry on publicly determined terms into their actions and their disbarment from EVER working with children again.
5/ We seek the closure of Childrens Courts and the abandonment of the Childrens Court Clinicians.
6/We support all Calls for closure of similar government organisations in The UK Canada New Zealand and The United States of America.

Facebook Group
Posted by Occupy Sydney at 20:44 No comments: